Our mission is to maintain a beautiful environment of independent living for Christian Scientists 55 and over and for those who value the teachings of Christian Science.

Rockhaven is located in the historic town of Glastonbury, Connecticut.  Founded in 1693, Glastonbury is rich with tradition, beautiful trees, and community events.  Small town charm with easy access to modern conveniences.

Rockhaven, a beneficial trust for Christian Scientists, was founded in 1973 to carry out the terms of the will of Stanley A. Mason.  His bequest was a memorial tribute to his good friend, Lena Upson, with the provision that the funds be used to establish housing for “Christian Scientists of advancing years.”

The Rockhaven Board of Directors continues to fulfill that request today by creating and sustaining beautiful apartments, which support ongoing spiritual growth and development.  Our residents are 55 and over, and live active, independent lives while appreciating a like-minded community of Christian Scientists.  Our goal is to create an environment that encourages independence, while offering support for those who value Christian Science.

Founded for the benefit of Christian Scientists, Rockhaven is a 501(c)3 non-profit organization.  We endeavor to keep our apartments as affordable as possible for our residents.  Tax-deductible donations help us offer below-market rates on our apartments, and also perform necessary capital improvement projects.  Click here to make an online donation.

The property on which Rockhaven was built was purchased in 1977 and was a trapezoid piece of land in Glastonbury between Hubbard Street and New London Turnpike.  It included a house built in 1930 in a French Provincial style, but with modern (at the time) materials.  The Administration House is the home of the Executive Director.

In 1978, ten apartments were built to the east of the house and all have Hubbard St addresses. 4 of these apartments are 2 bedrooms, and the rest are one bedroom.  One apartment has a full finished basement, including an extra bathroom.  Two other basements have a single room built in.

In 1985, eight more apartments were built to the west of the Administration House and the property to the north, on New London Turnpike was sold to the contractor who built the last eight apartments.  He built condominiums which look like our apartments but are on a lower level than we are.  Our apartments have Rockhaven Drive addresses as do the condos.  Of our apartment basements: one is completely finished, one is over half finished, two have single rooms and one has only a bathroom. 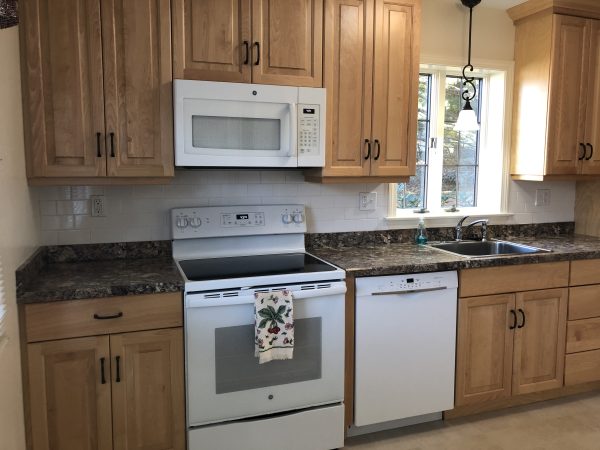